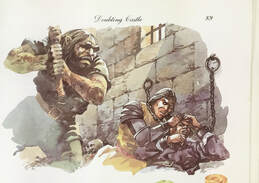 by Mark Willey CAPTURED BY GIANT DESPAIR into DOUBTING CASTLE ​I am really excited about a new sermon series on the promises of God , that will run most Sundays from October thru January. Called  “The Key of Promise”, the series takes its name from an event in Pilgrim’s Progress.  Christian and Hopeful are thrown into the dungeon of Doubting Castle.  For four days they are brutally beaten by the cruel lord of the castle, Giant Despair.  On the eve of their execution, Christian remembers a key. In his exhausted weakness he exclaims, “What a fool I am, to lie in a stinking Dungeon, when I may as well walk at liberty. I have a Key in my pocket called Promise, that will, I am persuaded, open any Lock in Doubting Castle.” The key works!  And the two pilgrims escape the horrors of imprisonment to Doubting Castle and  Giant Despair.God’s promises are His means of delivering us from the darkness of our fear, worry, self hatred, rejection, and a multitude of other struggles that land us in the prison cell of despair and doubt. This series focuses on some of the great promises of God to his people. They bring us hope and inspire our faith.  We will repeatedly see two things that enable you to endorse these promises in your life. 1. You must believe that God has made promises to YOUAbraham believed in God’s promise, “just as it had been told to him” (Romans 4:18).  God commits himself to provide many cherished resources to all His children at all times.  But, He also provides individual promises to you individually.  The glory of reading and praying Scripture is that God affirms specific Scriptures as personal promises to His kids in the situations of their lives.  So often, we miss hearing promises that God is ready to make to us, because we are not looking for them.2. You must entrust yourself to God’s promiseTrust God – The Apostle Paul was on a ship, headed for Rome.  He was a prisoner.  When they hit a hurricane, God spoke to him. God said that the ship would safely land on the shore, and  no one would be lost from the ship.  Paul, a landlubber, dared to tell the seasoned sailors who were despairing of hope, “I have faith in God that it will happen just as He told me”. (Acts 17:25).  He stuck his neck out with a remarkable declaration of trust, based on the promise of God. Obey God – Trust and obedience follow parallel tracks.  The Israelites failed to obey.  They arrived at the land God had promised to them.  God had repeatedly promised that he would give them the land.  He threw in the houses, farmlands, flocks and wealth of the wicked people of the land .   All was there for God’s people to receive.  But, they failed to embrace it because they were afraid of the “giants” in the land.  The people of the land’s forts and armies were bigger to them than the God of heaven.  They missed out on God’s promise because fear caused them to not take what God promisedThis study focuses on God’s promises to His people in the Book of Isaiah.   Among those we will highlight: God’s Promise of Strength and Help (Isaiah 41:10), Guidance (Isaiah 30:21),  Peace (Isaiah 26:3-4), Comfort (Isaiah 66:1-3), The Promised ONE (Isaiah 9:6), Protection (Isaiah 43:2; Isaiah 25:40), along with others! Let’s not stay in the “stinking dungeon” of fear and despair, for we have a “key in our pocket called Promise”!