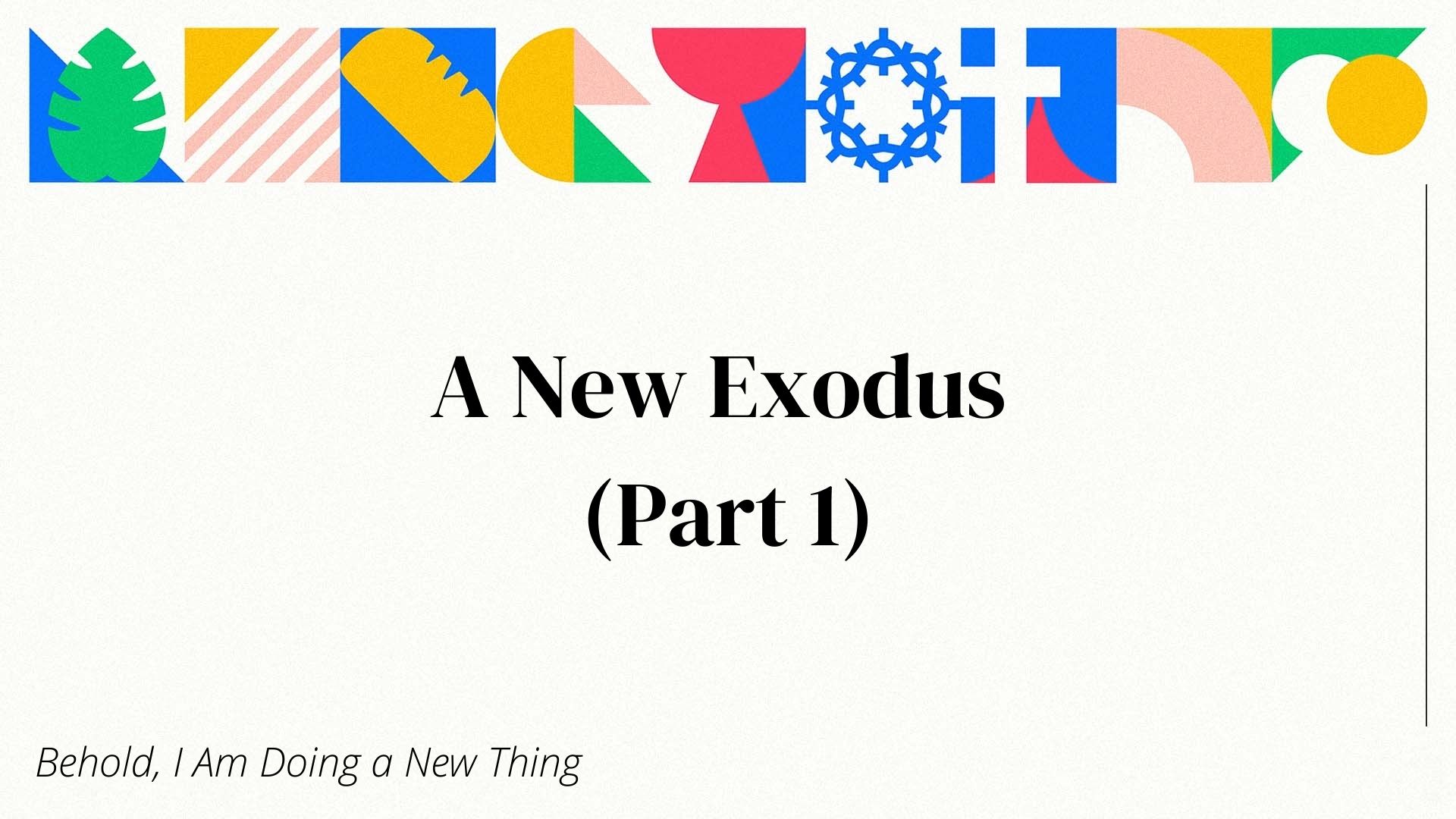 The first book of the Bible ends with Jacob (aka Israel) dying as a stranger in the land of Egypt.  But God had been good to Jacob in bringing him to Egypt with his sons and their families.  You may recall how he used Jacob’s son, Joseph, to bring about the preservation of his people and keep the promises he made to Abraham, Isaac, and Jacob – the promise that he would make, of them, a great nation.  And they became just that during their time in Egypt.  So much so, that when a new Pharaoh arose who did not remember Joseph, he put them into bondage as slaves, because they had become many and strong.

The Second book is called Exodus, which literally means “a way (road) out”.  After 400 years of slavery, Israel’s children wanted out.  And God did get them out of Egypt.  The story of the Exodus is one that looms large over the entire history of the nation of Israel.  It is told again and again.  God never lets his people forget what he did for them when he took them by the hand and led them out of Egypt.  During their exodus from Egypt God sustained them in miraculous ways.  He gave them the Law and made a covenant with them.  He guided them like a shepherd during their years of wandering.  He brought them safely into the land he had promised to their fathers, five centuries before.

Throughout the entire exodus and the years of desert wandering,  the Children of Israel never embraced Yahweh as their God.  They complained and contended with God and his appointed leaders endlessly.  They longed for the “good ole days” back in Egypt.  And in their hearts there remained an unexplainable desire to seek after other gods.  When they did settle into their land – a beautiful, abundant land – things did not change.  There were moments of national repentance, to be sure.  God would deliver them from a foreign oppressor and the people would swear allegiance to Yahweh only to forget him again and pursue other gods.

In one of the most heartbreaking moments in this whole tragic story, God’s own people rejected Him as being king over them.  Instead, they demanded to have a king like all of the other nations (1Sam 8).  The ones that Yahweh took by the hand and led out of captivity, the ones He fed and protected, the ones He bound Himself to in covenant, rejected Him and demanded a human king instead.

So, God gave them a king.  With few exceptions the kings of Israel were evil men who led God’s people into all sorts of evil, embracing everything imaginable but their holy, loving, patient, compassionate God.  The kingdom was divided by civil war and there came a point where God had finally had enough.

(I strongly encourage you to read Ezekiel 16 in its entirety.  In that passage, Yahweh himself tells Israel’s story from his point of view.)

The story to this point is a story of God’s own people rejecting their God.  Their rejection of God was most prominently displayed in their pursuit of foreign gods, the way they treated their own people, the way they treated foreigners in their land, and the way they abused the land itself.  They had despised God’s Law, the covenant he made with them. These were their sins.  This is why God was sending them into exile.

In the years leading up to the Babylonian exile, God, through the prophets, warned his people of thier coming exile.  But as he was warning them of war and destruction and defeat and exile, in the very same prophetic words he spoke of comfort and peace and return from exile.  He spoke to them in words that were reminiscent of the exodus from Egypt.  But he makes it clear that he is doing something altogether different – something new.

who makes a way in the sea,

a path in the mighty waters,

who brings forth chariot and horse,

they lie down, they cannot rise,

Those words would bring to memory the oft told story of the parting of the Red Sea, and the destruction of Pharaoh’s army on the night of the exodus from Egypt.  But  the Lord continues:

“Remember not the former things,

nor consider the things of old.

Behold, I am doing a new thing;

now it springs forth, do you not perceive it?

In pronouncing judgment, God extends hope to his wayward people.  In faithfulness to himself and the promises he made to their Fathers, Yahweh will bring his people back.

There will be “a way out” of the exile.

There will be a New Exodus.