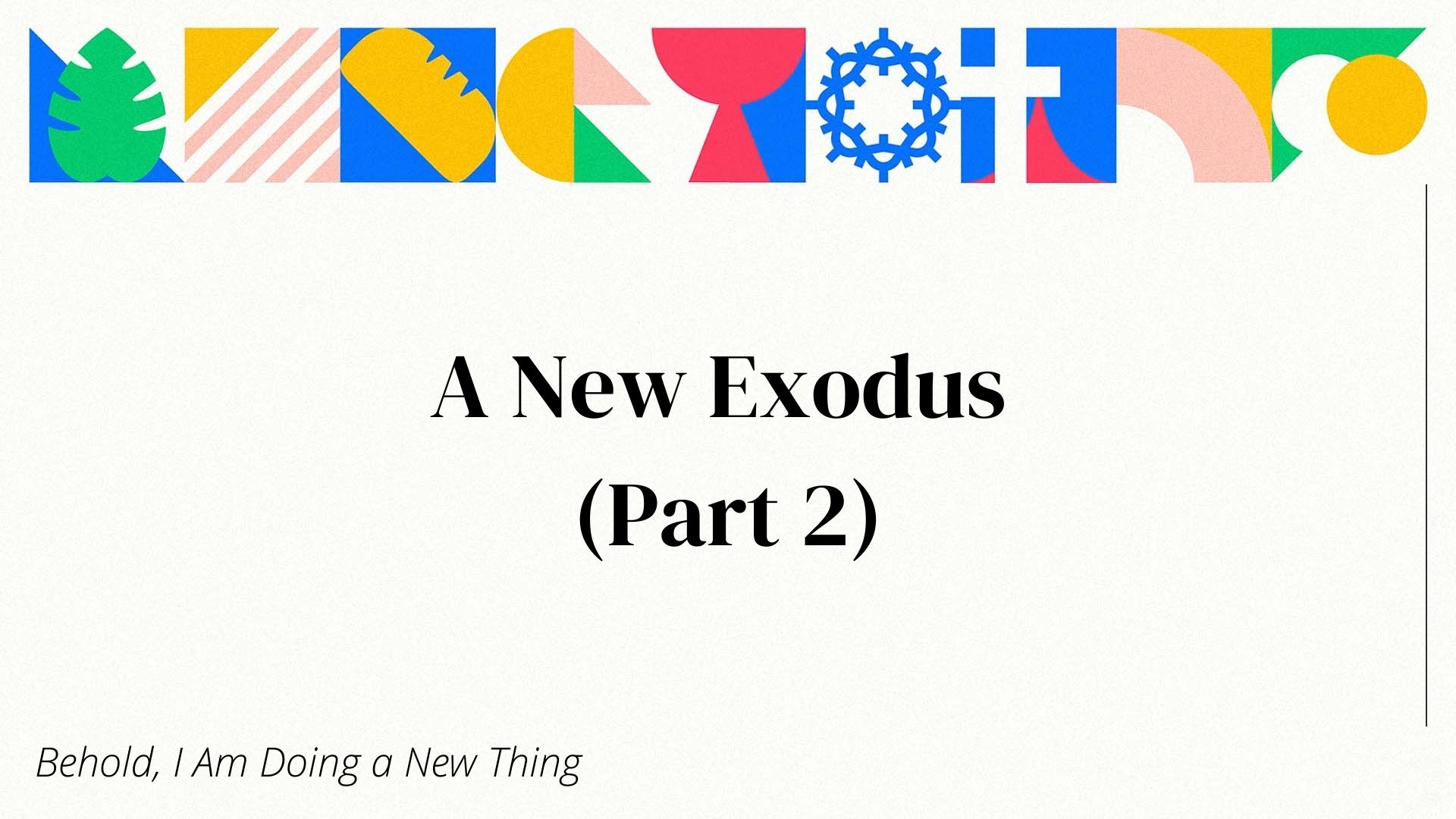 You will recall from part one, the word exodus literally means “a way out”.   God’s people (what remained of them) had been carted off into exile because of their sins.  As it was with the first exodus,  Israel was once again in a foreign land, in servitude to a foreign king, scattered, displaced, and ashamed.  Israel needed a way out, again. They needed a New Exodus.

As we saw in part one, God promised that with the return from exile the people would be returned to their land.

There is a second part to this promise of a return from exile and that had to do with the promise of forgiveness for sins – the reason they were in exile.

The Prophets Jeremiah  and Ezekiel speak of a New, Everlasting Covenant that God would make with his people – not like the covenant he made at the exodus from Egypt.  This covenant would ensure that the people would never be exiled again because God’s Law would be internalized – written on their hearts.  In fact he would replace their stone-hard hearts with hearts of flesh.  Finally Yahweh would be their God and they would be his people.  These promises are predicated on this one thing – God would “forgive their iniquity and remember their sin no more.”

In Isaiah 40:1-2, God tells Israel that when her “hard service” is ended, her sins will be forgiven.  In other words, when her sins are dealt with, her exile will have ended.

Lamentations 4:22 is crystal clear when it declares:

“The punishment of your iniquity, O daughter of Zion, is accomplished;

he will keep you in exile no longer.”

The people did return.  In 537 BC Israel returned to Palestine.  They got right to the work of restoration – first the Temple and then the walls of Jerusalem.  They were in the land, but things were not as glorious as they had envisioned.  They were harassed and oppressed by the nations around them.  They were still under the dominion of a foreign king.  They quickly returned to mistreating the poor among them.

The books of Ezra and Nehemiah capture this part of the story for us.  For all of the effort and dedication and repentance of the people, the one glaring feature of the story of the return from exile is that God does not come back.  The people do the best they can to make the dedication of the Second Temple a glorious affair – but God does not inhabit that temple.

The sad reality settles in on the people that their exile has not ended.  God has not dealt with their sins.  He has not forgiven them.  They have yet to be redeemed.

The prophets who write after the exile, as well as their non-biblical contemporaries, write of forgiveness and God’s return as a future thing.  For 400 years after the close of the Old Testament, the people waited in silent hope for their deliverance, their salvation, the forgiveness of their sins, and their return from exile.

At this point let’s stop and remember that the Story does not begin at the beginning of the second book of the Bible.  It begins at the beginning of the first book.  It is there in Genesis, only three chapters into the story, that we find our first father and mother expelled, from their home that was prepared just for them.  Exiled for their sin.  And as they are sent into exile, their Maker God plants the seed of the promise that he will make “a way out” of exile for them.

As we hear the story of Israel’s exile, we remember that we have heard this story before.  Israel’s story is a sub-plot in a larger story, a story not only of Israel’s children, but of Adam’s.  And as Israel’s children wait for forgiveness during those long years of God’s silence they wait with the rest of Adam’s fallen race for the “fullness of time to come.”  They waited in knowledge, the rest of us waited in the darkness of ignorance.

The “fullness of time” did come!  It would take more space than I have available to bring together all of the promises and pieces of promise that all converge on one single moment in time:

God would once and for all do what he had to do to deal with sin, not just Israel’s sin, “but the sins of the whole world”.

As the New Testament opens, it is not detached from the story God is telling – the Story continues. The Angels, Mary, Elizabeth, Zachariah, Simeon, John the Baptist, and Jesus all reach back into the story to explain what is going on in the coming of Jesus.  God is visiting his people with salvation, redemption, forgiveness – not just Israel, but all of Adam’s race.  God has made “a way out”, and Jesus is the Way.

Jer 16:16-18 says that after Yahweh has doubly repaid Israel for their sins by driving her into exile he would bring her out of exile by sending “many fishers”, and “many hunters” to gather his people back to him.  So, when Jesus says to two brothers who are fishing by the Sea of Galilee:

“Follow me, and I will make you fishers of men.”

He is not just being clever.  He is declaring to them that the time of Israel’s return from exile, the new and final exodus, is at hand.  It is an invitation for them to join him in realizing the fulfillment of the long awaited promises of God.

Those two fishermen (Peter and Andrew) were there for opening day.  They were privileged to be two of the “fishers” God called as the ingathering of his people began on the Day of Pentecost.  It was a good day, but it was just the beginning.

“He has delivered us from the domain of darkness and transferred us to the kingdom of his beloved Son, in whom we have redemption, the forgiveness of sins.”

Paul borrowed those words from Isaiah 44:22 where Yahweh says to his people

I have blotted out your transgressions like a cloud

return to me, for I have redeemed you.

The long darkness of exile has ended.  Our God has made “a way out” for us.

The best part is that we know the Way – His name is Jesus.