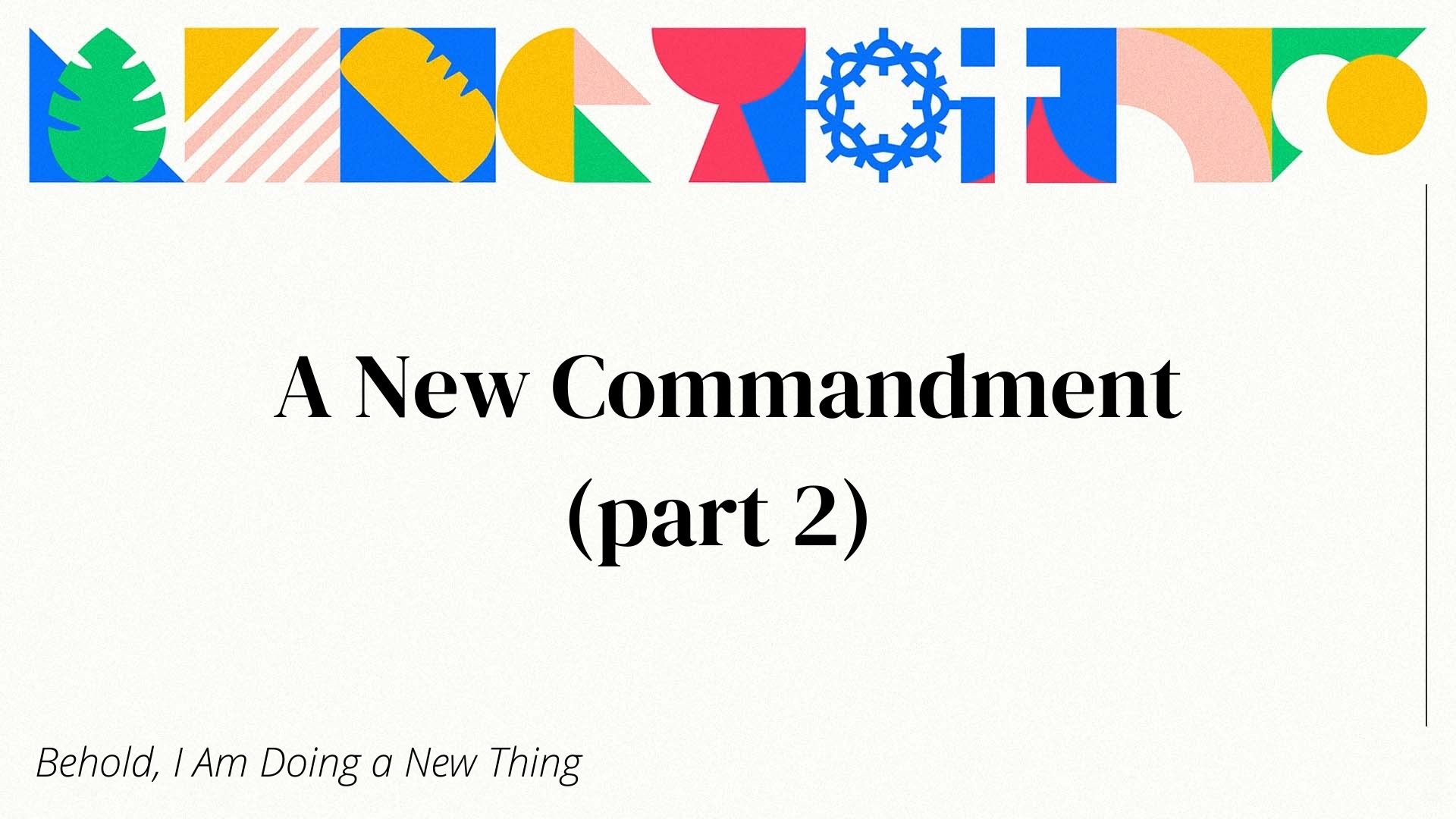 John 13-17 is known as Jesus’s “Farewell Discourse”. He would not be with his disciples again in his pre-resurrected state. They had spent years together, and now everything was about to change. We looked last time at how Jesus set the stage for his final instructions–he laid aside his status as Host, Teacher, Master, Lord. He washed their feet.

After giving the disciples this example, Jesus begins his farewell teaching by commanding them to love one another just as he has loved them. Why? If the disciples have love for one another, all people will know they are disciples of Jesus. It matters to Jesus that people know who his followers are. He wants his disciples to be easily identified–like a city on a hill, a light on a stand.[1] We’ll take a closer look at this new commandment from Jesus, given just hours before he is crucified.

So what’s “new” about this commandment? When asked which commandment is the greatest, Jesus replied by quoting Deuteronomy 6:5 (love God) and then Leviticus 19:18 (love your neighbor as yourself). All the Law and Prophets depend on those two commandments.[2] Jesus isn’t introducing a brand new concept here when he commands his followers to love each other.

But his next words show where the newness is found. Just as I have loved you, you also are to love one another. Jesus’s entire life is an example of how his followers are to love each other. There is a reason we have four divinely inspired and preserved accounts of Jesus’s life, each culminating with his death and resurrection. His death on the cross was not a plot twist–it was the pinnacle of his life of service. He came not to be served, but to serve and to give his life as a ransom for many.[3] This is completely new–never before had God taken on human form to live as the perfect human. Jesus now commands his followers to look to him as the paradigm for how to love each other.

By This All People Will Know

As he is preparing his disciples for his departure, it is clear that Jesus cares deeply about them staying together as a unit. The rest of his discourse is filled with promises of divine comfort and help as the disciples must be wondering how they could ever stay together without their Teacher.[4] And Jesus begins by telling them what he wants for them. He wants them to be a unit that is distinct from other units. How so? What would be the distinguishing mark that identified them as his followers?

First, let’s consider what Jesus didn’t say. “By this all people will know that you are my disciples, if you…

Don’t get me wrong–each of the points above is a calling for followers of Jesus (hence the verse references). But Jesus didn’t draw on any of these when telling his disciples what would be their distinguishing mark. The characteristic Jesus says is the one that will easily identify his followers is the love (the self-sacrificing, counting each other as more significant, washing feet kind of love) they have for each other.

The Jesus Life is a Regatta

No, a regatta is not a pasta dish–it’s a rowing race. I’ve never participated in one, and I think the window has closed (or was never open) on my chances to do so. But, I did recently read a book about the 1936 US olympic crew.[5] As I was reading this book about a team of 9 college kids from Washington state who banded together against all odds to win gold in Berlin, I was struck by a few quotes from the book which hopefully will help bring this home.

You’ve probably heard the expression, “Life’s not a sprint, it’s a marathon.” I get the idea, but each of those are races run by individuals. The Jesus-life is more like a team regatta. In a team regatta, the team that wins is the one that best learns to act as a unit. The quotes above show this to be a concept the crew understood and embraced. And that was for a gold medal–pretty high stakes.

Our Stakes Are Higher

Jesus’s teaching about this new commandment clearly made an impact on John. It is in John’s gospel that we get the fullest account of the Last Supper and the Farewell Discourse with the new commandment. Later, in 1 John he writes:

Yes, our stakes are higher than a gold medal. Jesus, our King, defeated death and now invites us to participate in his life–a life characterized by having his mind and loving his followers the same way he loves his followers.[7] All people should notice a different kind of love among Jesus followers–a love that pushes them to make a decision about Jesus. Our stakes are light defeating darkness, good defeating evil, life defeating death.

[4] Check out Pastor Mark’s sermon Jesus’s Promise of a Replacement–around the 13-minute mark is a thoughtful portrayal of how the disciples may have been processing this farewell discourse.

[5] The book is The Boys in the Boat by Daniel James Brown–I highly recommend it!