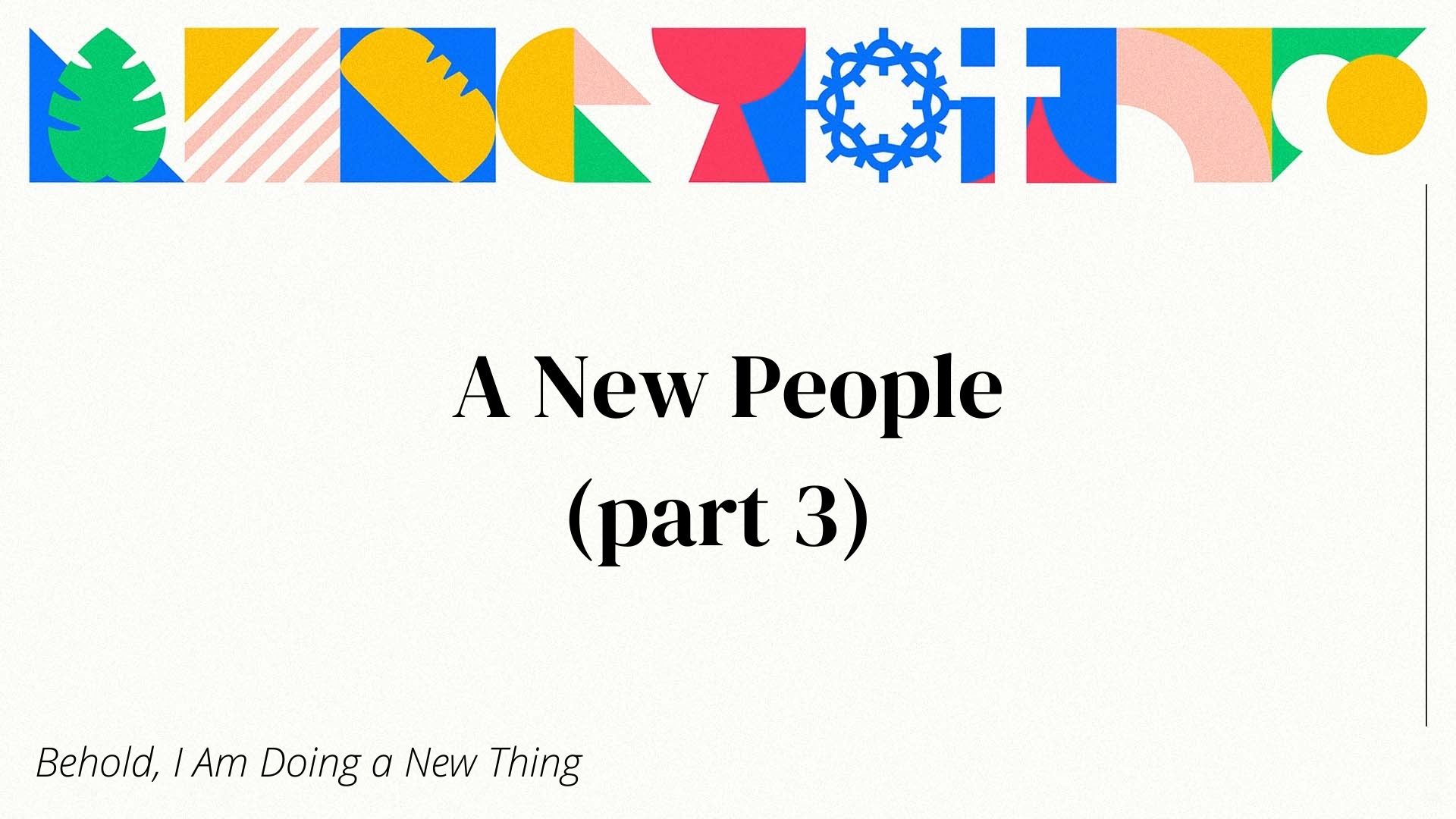 For sake of space, let’s just jump right in where we left off in part 2.

God is calling his people back to himself – and no one (or thing) will stand in his way.

I don’t think there should be any surprise then that the term chosen to describe the people who are responding to God’s call would be “ekklesia”. The word itself is a compound word made up of ‘ek’ (“out”) and ‘kaléō’ (“to call”). In the common usage of the day, the ekklesia was the gathering of the “ekkletoi” – the ones called out.

God’s call has gone out and there is no one to stop it.

In Acts 11 – the same chapter where Peter reported to the church in Jerusalem about the Spirit’s falling on the gentiles – we find that, try as they may, the believers cannot stop the spread of the gospel to the gentiles.

Now those who were scattered because of the persecution that arose over Stephen traveled as far as Phoenicia and Cyprus and Antioch, speaking the word to no one except Jews. (Acts 11:19 ESV)

But then, before they know it, someone goes and shares this good news with some non-Jewish greek-speaking locals and BAM! Just like that, a great number believe and turn to Jesus. No doubt, this is developing into a situation. Before things can get out of hand the church in Jerusalem sends a trusted brother named Barnabus up to Antioch to look into things. Barnabas is pleased with what he finds in Antioch.

For some unexplained reason, while he is there, Barnabas looks for and finds one “Saul of Tarsus”. I don’t have the space here to recount the story of Saul for you[1], but let it suffice to say that from the very beginning, Saul (later named Paul) was destined to be an instrument of God’s calling to his scattered people. Jesus himself said of Saul,

“… he is a chosen instrument of mine to carry my name before the Gentiles and kings and the children of Israel. For I will show him how much he must suffer for the sake of my name.” (Acts 9:15-16)

Of all people, Paul might be the least likely chosen for this task. We don’t know what he thought of gentiles, but we do know what he thought of Jews who chose to become Jesus-followers – “round them up and kill them.” It seems to me that Paul would have had a more “Jonah-like” attitude when it came to dealing out righteousness on the nations. Something along the lines of, “They deserve what’s coming to them! Let ‘em burn!”

But this passionate, Jewish, Jesus-follower learned something early in his career as a chosen instrument. He took no credit for his insight, rather he contended that it was his by revelation.[2]

Just listen to a few of the things he wrote.

Therefore remember that at one time you Gentiles in the flesh, called “the uncircumcision” by what is called the circumcision, which is made in the flesh by hands— remember that you were at that time separated from Christ, alienated from the commonwealth of Israel and strangers to the covenants of promise, having no hope and without God in the world. But now in Christ Jesus you who once were far off have been brought near by the blood of Christ. For he himself is our peace, who has made us both one and has broken down in his flesh the dividing wall of hostility by abolishing the law of commandments expressed in ordinances, that he might create in himself one new man (i.e. new humanity[3]) in place of the two, so making peace, and might reconcile us both to God in one body through the cross, thereby killing the hostility. And he came and preached peace to you who were far off and peace to those who were near. For through him we both have access in one Spirit to the Father. So then you are no longer strangers and aliens, but you are fellow citizens with the saints and members of the household of God, built on the foundation of the apostles and prophets, Christ Jesus himself being the cornerstone, in whom the whole structure, being joined together, grows into a holy temple in the Lord. In him you also are being built together into a dwelling place for God by the Spirit. (Eph 2:11-22)

He then goes on in Chapter 3 of Ephesians to declare that this was always the plan – that God would call his own people from all of the nations – though it may have been hidden in ages past.

When you read this, you can perceive my insight into the mystery of Christ, which was not made known to the sons of men in other generations as it has now been revealed to his holy apostles and prophets by the Spirit. This mystery is that the Gentiles are fellow heirs, members of the same body, and partakers of the promise in Christ Jesus through the gospel. (Eph 3:4-6)

Speaking of this new humanity, in Colossians 3:11 he says:

Here there is not Greek and Jew, circumcised and uncircumcised, barbarian, Scythian, slave, free; but Christ is all, and in all.

The Apostle Paul would become the champion and poster child in defining and defending this New People. In the mind and language of Paul there is but One Body[4]. Each of his letters, to one degree or another, is an argument for the unity of the believers in Christ Jesus. He never ceases to marvel[5] at what God has done and is doing in the church (i.e. “the assembly of the called out ones”) as it grows all over the known world.

A Battle Worth Fighting

This was an uphill battle for Paul, particularly among his Jewish brothers. The “battle” for defining the church (i.e. the assembly of the called out ones) would dominate the church for the first few decades after Pentecost. Understandably so.

In his letter to the Galatian churches, Paul recounts a tense encounter with Peter.

But when Cephas came to Antioch, I opposed him to his face, because he stood condemned. For before certain men came from James, he was eating with the Gentiles; but when they came he drew back and separated himself, fearing the circumcision party. And the rest of the Jews acted hypocritically along with him, so that even Barnabas was led astray by their hypocrisy. But when I saw that their conduct was not in step with the truth of the gospel, I said to Cephas before them all, “If you, though a Jew, live like a Gentile and not like a Jew, how can you force the Gentiles to live like Jews?”[6]

Peter capitulated. He played the hypocrite. He was engaging in full “One Body”, united-in-Christ, fellowship with the assembly of called out ones in Antioch. Under pressure from some Jewish believers, who were convinced that one must live like a Jew[7] to be a follower of the Messiah, Peter caved.

But Paul could not stand by and watch this happen. What was at stake for him was the very message of the Gospel itself. This was no secondary issue. The fate of the Assembly hung in the balance.

But if, in our endeavor to be justified in Christ, we too were found to be sinners (i.e. Gentiles), is Christ then a servant of sin? Certainly not! For if I rebuild what I tore down, I prove myself to be a transgressor.

What could he mean by “endeavor to be justified in Christ?” To work hard at being justified by someone else? Letting someone else do the work is the opposite of endeavor – isn’t it? I think what he is saying is that to work hard at not justifying yourself is hard work – especially when your people have been working so hard for centuries to establish a righteousness before God that would usher in forgiveness.

To believe that forgiveness of sins (my sins, and the sins of my people, and the sins of all of Adam’s fallen race) would be accomplished by Yahweh through the person and work of his Son, Servant, Messiah, would be a gift of grace through faith.

This is the endeavor – to believe that what God said he would do he has done. To believe that salvation is a gift of God’s grace through faith, and not by our endeavor to justify ourselves, is a gift itself. We cannot even boast about our faith.

It would take those early Jesus-followers a moment to figure this out. And in some ways we are still figuring it out in our own time and place in the telling of this Story of God.

By the end of his life, Peter understood. From his prison cell in Rome[9] Peter sent off a letter to the churches in Asia Minor. The churches he writes to are predominantly gentile congregations, but not completely. Jewish believers who were driven from their synagogues and Gentile believers who were no longer welcome or desirous of worshiping in the temples of idols found community in the one thing they had in common – Jesus Christ. To those persecuted communities of believers, both Jews and Gentiles, Peter writes:

“But you are a chosen race, a royal priesthood, a holy nation, a people for his own possession, that you may proclaim the excellencies of him who called you out of darkness into his marvelous light. Once you were not a people, but now you are God’s people; once you had not received mercy, but now you have received mercy.”[10]

Every phrase of this is a direct reference to the Old Testament.

The first phrase comes from Exodus 19. On the eve of the covenant Yahweh would make with Israel (the Old, Sinai Covenant), he commanded Moses to say to the people gathered at the foot of Mt. Sinai:

“Now therefore, if you will indeed obey my voice and keep my covenant, you shall be my treasured possession among all peoples, for all the earth is mine; and you shall be to me a kingdom of priests and a holy nation.’ These are the words that you shall speak to the people of Israel.” (Ex 19:5-6)

And that last phrase, you will recall from part one of this article.

“And I will have mercy on No Mercy,

In alluding[13] to these two texts, Peter is recalling the entire history of Israel as a nation. From the receiving of the Law, which constituted them as a nation, to the prophet who brought to them the word of their exile, Peter has captured it all.

And he applies it to a persecuted people (not a Jewish people, or a Gentile people, but to an assembly of called out people) who are learning to cling desperately to one another and the hope they have found in the promise-keeping, ever faithful, true-to-his word, God of Israel. They were learning that:

And there, in Christ, that apostle of Jesus Christ says to us, and we must learn, together, that:

“We are a chosen race, a royal priesthood, a holy nation, a people for his own possession, that we may proclaim the excellencies of him who called us out of darkness into his marvelous light. Once we were not a people, but now we are God’s people; once we had not received mercy, but now we have received mercy.”

[9] Many (most?) Biblical scholars believe that 1 Peter was written, around 62-63 AD, by Peter, while he was imprisoned in Rome, awaiting his execution.

[13] Allusion is probably not a strong enough word. “Loosely quoting”, would be more appropriate..