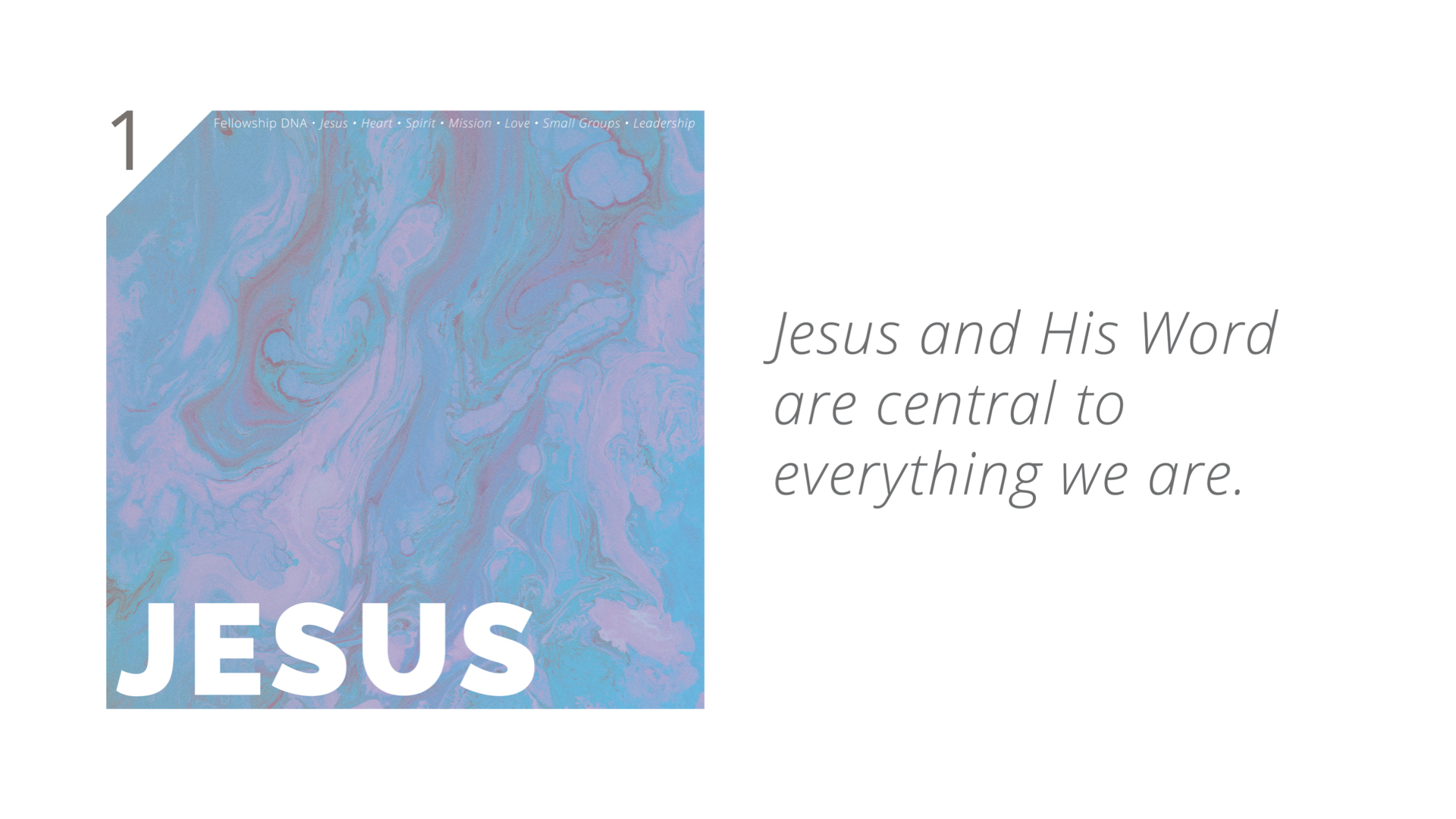 Ben Willey: Hey, everybody. Welcome back. And thanks for making it to the second episode of our DNA series that we’re doing. Let me introduce to you the band. Again. We have pastor mark here

Mike Candy: How are ya?

Ben Willey: And I’m pastor Ben. And I was a little bit of a Southern draw draw there, Mike. We are looking at the first statement of the DNA today, which simply says Jesus and his word are central to everything we are. First question to you. Pastor mark, when we were constructing these statements, why was this number one?

Mark Willey: I think everybody has a center to their lives. Everybody does. Some people, maybe they make their center, their, their family, their job being happy. For some people it can be sports.

When you embrace Christ, I think the biggest change that takes place is you get a new center, you have a different orientation than you had before. I mean, 2 Corinthians 5:17 says if anyone’s in Christ, the new creation has come. The old has gone. The new is here. What’s the old that has gone?

I think it’s it’s me on the throne of my life. It’s it’s, I’m centered. There are other things that I tried. Pursue, but ultimately it’s me being the central reality in my life and what I want, how I want to do it. What makes me happy when you embrace Christ, you have this new orientation, it’s wine. First, Peter, it talks about when you become a Christian in chapter four, it says people think you’re strange that something is really different.

And I think the biggest change. Is Jesus becomes the central reality, the person that you want to direct and lead your lives. And so I think it should be the first value because it’s the foundation on which we do life together. It’s what being a church is. We agree. We want him to be center. We want him to be Lord.

We want him to be on the throne.

Ben Willey: I reminded of when I had my first child Atticus, I was wrestling because I, you know, some, most of the times our idolatries are, are good things that we make the primary thing and realizing I have this son coming and I, I, he’s going to matter so much to me, but how do I not make him the center of the world and had a friend just advise. He said, listen, when Jesus is the center, everything else can be held in orbit. He said, your son is not big enough to hold everything else in life in orbit. So make Christ the center and your son is loved Val. But it’s an unfair responsibility to put him in the middle, but Jesus in the middle, everything else finds its proper place.

And we believe that. So foundationally, as you said, pastor mark, when it comes to church, Mike is as we read the statement and. No, this one is very important to you. If there’s a funny word at the end of this statement, when you read it, your brain naturally wants to read Jesus and his word are central to everything we do, but instead it says Jesus and his word are central to everything we are. Why this language and what does this have to do with not just the activity of the church. But the very identity of us as a people?

Ben Willey: Explain ourselves no old English in 2013. I can’t remember. But

Mike Candy: yeah, I think Ben, you just said it. We can do a lot of great things if there’s not a mark, as you said, a center that we’re coming from.

Who’s on the throne, directing all of these activities. We can just be a group of people doing things, being in small groups developing leaders and all these things, but they really aren’t out of an identity of a group of people who follow Christ. He is the censor, everything flows from that identity.

Then we’re not a club. This is not a team. This is the truth. And he is our leader. We have a leader, we have his word, we know our mission then, and we stick to that. And so the idea that it’s all that we are, it’s the starting point. These again are our unique emphases of our church, but this one seems a central one.

Again, we are, we are not an organization of just friends getting together. We are an organization of Christians, people that worship Christ. Gathered together to weaponize the gospel. That might sound like a bad thing, but we use it to bring the hope of Christ to the world. I mean that in the best sense, and so Jesus and his word are central to everything we are.

I also think, you know, the, the phrase that we have, it’s all about Jesus. It’s not a phrase that we have. I think it’s a phrase we’ve gotten from the scriptures. If we really are reading the old Testament is a big, fancy word, a Cristo Telic reading that everything is pointing ahead toward Christ. We get to the new Testament and here is the lamb of God.

The, the old Testament sacrifice system that is over and done with, we have the once for all sacrifice. He becomes the sensor, then it’s not a made up construct from our church that we think Jesus is the coolest part of the Trinity. Philippians two five says that at the name of Jesus. Every knee should bow in heaven and on earth and under the earth.

And every tongue acknowledge that Jesus Christ is Lord to the glory of God. The father, he becomes the center where we’re bowing to Christ. And so when we see that it, it really becomes this beautiful direction that we can, we can bow down and worship. The one who is the very image of God, the father Christ.

Ben Willey: Hmm. It reminds me of something you say often Mike of formation is for mission for mission, but if we don’t have Christ as our governing center, We, we can just have formation be about formation or people be about people, but with our leader, Christ being the center of everything, he not only is leading his gospel into us, but through us, which is hard and messy into the world around us formations for mission, I’ve always loved that statement.

Ben Willey: In, in this statement it says, Jesus and his word.

And by that we mean scripture. How our as we’re looking right now in our time and pastor mark, I’ll throw this to you first. How are you seeing a centralizing passion around the scripture happening in our church right now?

Mark Willey: I heard a PBS talk, about our country that was going on during the center of the pandemic.

And he was limit lamenting the anger, the conflict, the confusion, the loud opinions, the divisions culturally. And he made a statement that really struck me. He said, I think we are all looking for something. We can build our lives around and it struck me how this really is the glory of the scriptures.

There’s a timeless messaging that speaks into any economic system. Governmental structure and cultural heritage. It tells us how to live our lives as part of a different kingdom. And I do sense a deep hunger to hear God speak culturally, but also certainly within our church family, we gathered 11 members of our church staff, a while back pastors and some ministry leaders.

And took time to just ask the question, where do you see God at work in your ministries? And we were writing stuff on the board, as people were talking and over and over, it was about the passion to learn God’s word, young people, seniors, young marrieds parents, single adults, men’s ministry women’s ministry.

We, I mean, it was just awesome. And that was the, the unifying thought was this, this hunger, to personally interact and know God’s word.

Ben Willey: Mike, what are some places that you’ve seen?

Mike Candy: One of the things that kind of happened recently was a few different ministries kind of. I ended up in the same place at this curriculum.

But essentially we’re going to walk through all the books of the Bible, studying together with the focus on Christ, in everything that we see. And so that to me is such a hunger coming from ministry leaders, but also that I’ve seen personally in my sphere is men that want to study God’s word.

It’s not shallow. It’s really deep. It requires some work outside of small group time just to be in God’s word. And it’s fun to be fed from the same fountain Christ his word and come together as people that are studying and knowing him together in the group.

Ben Willey: I think the scriptures are such a gift to us right now.

As many secular and Christian authors have said, and pastor mark, you referenced as well. That there’s, it’s a divisive time. There’s lots of opinions. There’s lots of thoughts out there. And, and in divisive times you want to have a home base. And so there’s lots of gravitational forces and it’s that are strong, whether that be political affiliations, your sports teams or your views on COVID or whatever, the different people are saying there it’s divisive enough. You, you feel scared into wanting, have a place of safety and what a gift, the scriptures are to us, what a gift it is to have a people that are longing to be in scripture. And we have ministry leaders who are so excited about. Because there are people are getting excited about it with them.

Wanting to understand what does it say help us understand dear God, what you are saying and that we build our lives around you and your kingdom as based in your word. And that centrality is so important for what fellowship has been in the past. And it’s really the only way. If we miss number one, DNA, number one, the centrality of Jesus and his word, the rest will crumble. So having this as our first DNA marking point core value is extremely important. That’ll preach. All right. That ends episode two. Hope to hear, you know, hope that you hear us again. And we hear back from you as we go into episode three. Thank you all.