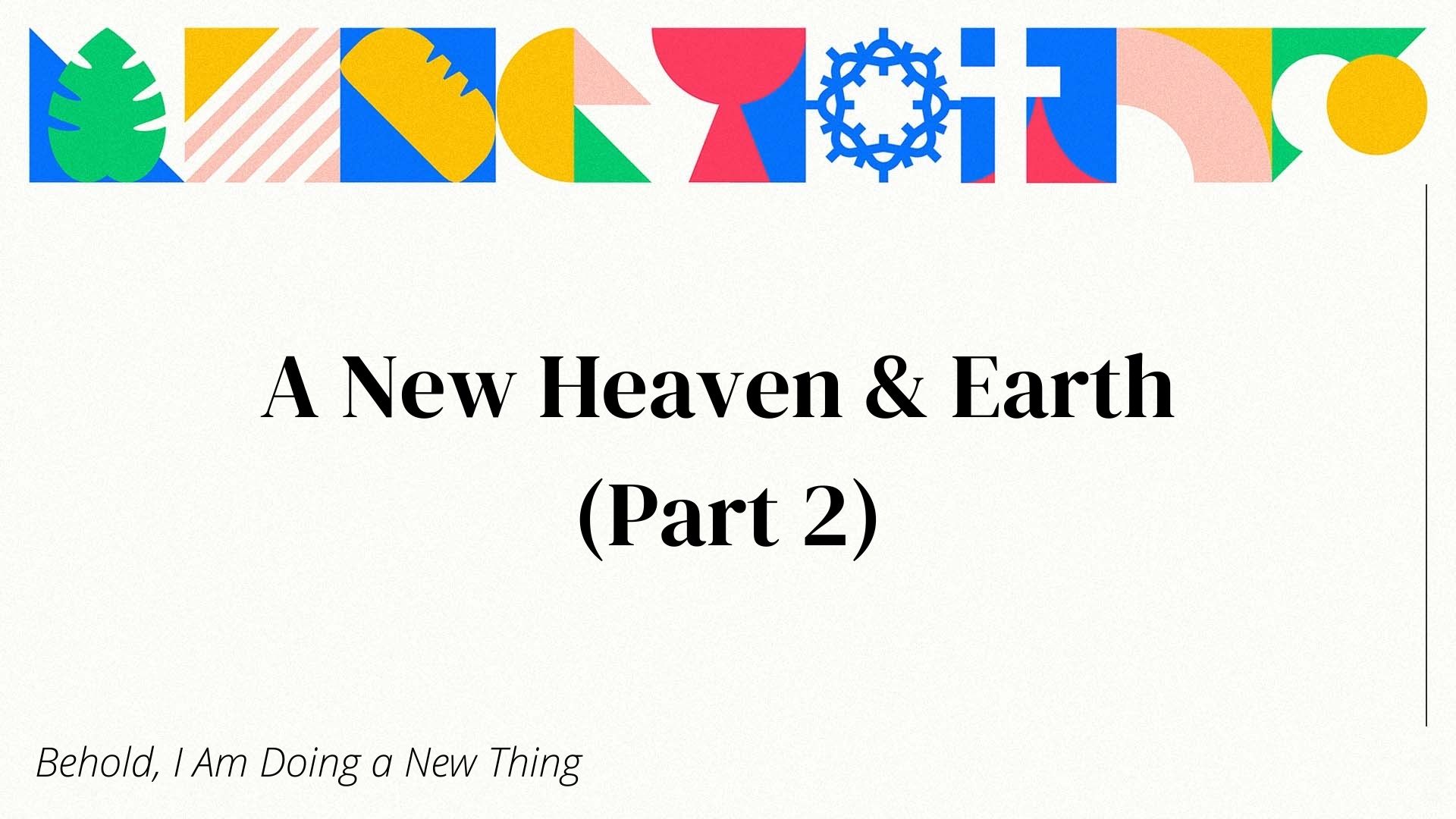 Know this first of all, that in the last days mockers will come with their mocking, following after their own lusts, and saying, “Where is the promise of His coming? For ever since the fathers fell asleep, all things continue just as they were from the beginning of creation.” For when they maintain this, it escapes their notice that by the word of God the heavens existed long ago and the earth was formed out of water and by water, through which the world at that time was destroyed by being flooded with water. But by His word the present heavens and earth are being reserved for fire, kept for the day of judgment and destruction of ungodly people.

But do not let this one fact escape your notice, beloved, that with the Lord one day is like a thousand years, and a thousand years like one day. The Lord is not slow about His promise, as some count slowness, but is patient toward you, not willing for any to perish, but for all to come to repentance.

But the day of the Lord will come like a thief, in which the heavens will pass away with a roar and the elements will be destroyed with intense heat, and the earth and its works will be discovered.

Since all these things are to be destroyed in this way, what sort of people ought you to be in holy conduct and godliness, looking for and hastening the coming of the day of God, because of which the heavens will be destroyed by burning, and the elements will melt with intense heat! But according to His promise we are looking for new heavens and a new earth, in which righteousness dwells.

But humans, suspicious of God withholding from them, rejected God’s hospitality and the gift of co-rulership, and so came disastrous consequences. In Genesis 3, God pronounces some of them to the first humans:

“…Cursed is the ground because of you;
In pain you shall eat of it all the days of your life;
Thorns and thistles it shall bring forth for you;
And you shall eat the plants of the field;
By the sweat of your face
you shall eat bread …”[1]

Earthquakes, tsunamis, hurricanes, wildfires, droughts, floods, famines, pandemics, and worse, one may infer, came because humanity spurned God’s hospitality and abdicated their responsibility to rule. Their home, now inhospitable, fell into disrepair and awaited a human Heaven-and-Earth ruler to return and repair all things.

That human did come: the God-Human, Jesus Christ. He bound the “strong man”[2] (Satan) who had broken in and taken over. He plundered that house where other such thieves[3] had taken up residence. And He began to cast out[4] those squatters, but not all at once.[5] He wanted to give His brothers and sisters time to repent and return to their with-God-home. So He promised to come again. Since then, creation has been waiting:

“…creation waits with eager longing for the revealing of the sons[6] of God. For the creation was subjected to futility, not willingly, but because of him who subjected it, in hope that the creation itself will be set free from its bondage to corruption and obtain the freedom of the glory of the children of God. For we know that the whole creation has been groaning together in the pains of childbirth until now. And not only the creation, but we ourselves, who have the firstfruits of the Spirit, groan inwardly as we wait eagerly for adoption as sons, the redemption of our bodies. For in this hope we were saved.”[7]

God the Son reclaimed humanity’s birthright of Heaven-and-Earth dominion when He “disarmed the powers and authorities, [i.e. demons, Satan] … triumphing over them by the cross” and ascended to His rightful throne beside the Father.[8] When He returns, all children of God will be restored to the grace of divine glory in co-rulership with God, and freedom will flow to all creation. All will flourish in loving union with God:

“But each [shall be made alive] in his own order: Christ the firstfruits, then at his coming those who belong to Christ. Then comes the end, when he delivers the kingdom to God the Father after destroying every rule and every authority and power. For he must reign until he has put all his enemies under his feet. The last enemy to be destroyed is death.  For “God has put all things in subjection under his feet.” … then the Son himself will also be subjected to [God] that God may be all in all.[9]

The hope for creation then, we see, is not freedom from slavery to decay and corruption; not the defeat of spiritual “rulers, authorities, and powers”; not that Death itself shall die; not even the resurrection of our bodies. No, but all that and more: it is that Christ should fill all in all[10]. The fullness creation was made for is not merely many creatures, nor even many humans, but the fullness of the Triune God,[11] “from whom and through whom and to whom are all things. To Him be glory forever. Amen”.[12]

What then can the “new heaven” and “new earth” mentioned in 2 Peter possibly mean? Is it really a whole different place? Or, if not, then what is so “new” about it? Let’s see.

Peter writes in v. 10, “But the day of the Lord will come like a thief, in which the heavens will pass away with a roar and the heavenly bodies will be destroyed with intense heat, and the earth and its works will be discovered.”[13]

This is a sobering truth.

“You mean to tell me that the world will be destroyed by fire on the Day of the Lord?! The entirety of the heavens and our whole planet Earth!?” Yes and no.

Notice the last part of v. 10 where it says the heavens will be destroyed by intense heat. It goes on to say “…and the earth and its works will be discovered.”[16] Interesting. The present heavens and earth are reserved for a fire that will cause them to be destroyed, but will also “lay [them] bare”; it will cause them to be “discovered” or “found” or “disclosed”[17]. But how can this be?

This, I submit, is the fire of God’s Word (Jesus Christ)[18] which, like Noah’s flood of water, must wash away–and, yes, purge as though by fire–all that is ungodly out of the creation[19]. The consuming fire[20] of Christ’s countenance[21] will flash forth, like lightning seen from one end of the cosmos to the other[22]. All shall look on Him whom we have pierced–either shrinking away in shame[23], or else gazing on in humble adoration[24]–and in that instant the world will end,[25] the world of sin and death. And these same Heavens and this same Earth, which God once made for all creatures to live with Him under the co-rulership of His children, will be made manifest: our home, where God is all in all. In that sense, they will be the New Heaven and New Earth.[26]

Today, do mockers deride Christ’s promise? Are you discouraged? Remember Noah, and be still. Know all mockers must be swept away in a swift torrent of justice. … But know too: Christ comes as fire to burn pure His heavens and earth and everything in them. Therefore, let us be ever looking for that new heavens and earth where righteousness dwells unassailed, ever pleading His mercy day by day, that we may be found at home in Him, lest, having clung to this world, we too be swept away. Amen.

[6] To be clear, the meaning is “sons and daughters” of God, both here and in v. 23 below. This is evident by the immediate reference to the “children of God” in the next sentence. If the reading “sons of God” is to be preferred, it is to clarify the Christian’s identification with and union with the Son of God, Jesus Christ, in whom we are adopted as God’s beloved.

[18] To clarify, this is not a novel interpretation of my own. See, for just one example, the Orthodox church’s understanding of Christ’s final judgment (https://www.oca.org/orthodoxy/the-orthodox-faith/spirituality/the-kingdom-of-heaven/heaven-and-hell)