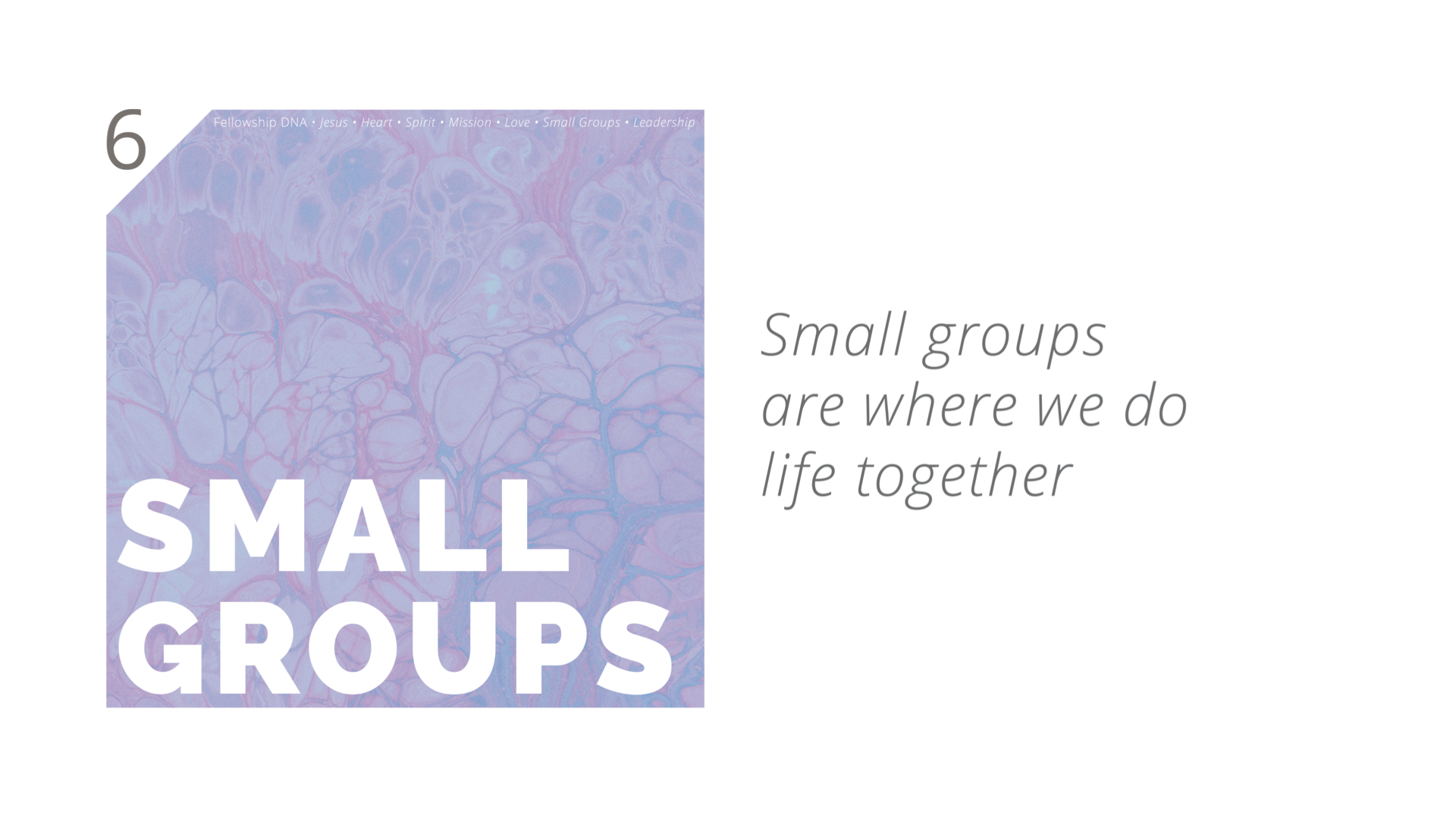 Ben Willey: Hey everyone. Welcome to fellowship podcast. I am here with pastor mark and pastor Mike. I am pastor Ben. We’re going through an eight part fellowship podcast on the seven DNA statements that the three of us wrote eight years.

Mike Candy: Eight parts, seven statements. Is there like a bonus episode or something?

Ben Willey: There’s not a bonus. There was an introductory one, which you were part of, but maybe weren’t awake for. The introduction episode and now the seven statements. And today, Mike, we come up to DNA statement number six, and I believe this is our shortest statement that we have. It’s about small groups and simply says this, Small groups are where we do life together.

Ben Willey: That’s all. And pastor Mark, we got to go to you first because different of this language is borrowed from each one of us as we constructed these statements. But I’m pretty confident that you wrote this one because we hear you say this phrase all the time. My question is small groups where of your life together, but first is why is it important for us to do life together?

Mark Willey: Why is because I think that was the whole early church, new Testament experience. Basically they did gather in a large assembly in Solomon’s porch there in the temple, but where they really did life together during the week was in small groups in homes. And that’s where, when Paul writes his letters, he keeps talking about these one, another things, encourage one, another exhort, one another, pray for one another.

Warn one another, greet one another, pray for one another. All of those are difficult to do in a large assembly on a Sunday morning. But where they really are lived out is in small groups. So I think where we do life together is where the one another’s of scripture can be lived out.

Ben Willey: And we are in a season of a church here in Mount Laurel, and even had this happen also in Collingswood too, where the congregation grows to a point where you can’t honestly say, Hey, we’re all one big, small group. It’s not a realistic thing to have that many friends. It might be for Mike, but not for the rest of us.

Ben Willey: One big small group. Yeah. Yeah. That’s good. So it’s like saying this is an old new statement. Okay. But my question to Mike is then how have we found small groups to be the most effective way to do this, to do ministry even while in a context of a larger church.

Mike Candy: The reality that you cannot hide and the real you comes out in small groups that might sound threatening, but it’s where we want to live as followers of Christ, not allowing in a day and age where we can curate whatever our social media presence might look like and put our best foot forward. And it’s pictures of a family that look great and I’ll put together.

When we meet on a Tuesday night for a small group and the wheels are coming off, we need people to speak into us. We need to be honest about where we are. And I think the reality of small groups is that there’s this idea of sharing life together is expected. You would naturally do that. And in some ways you can, if you come on a Sunday morning, show up, sit in a row, learn and move on without really interacting with content on a deeper level that it might even intersect with your own heart.

Yeah, I, I think the idea of come and see, you know, like come to the Sunday morning experience and then you walk out rather than come and be part of is the difference in where small groups really where life happens. This is a church, not a concert, not a lecture. We don’t sell tickets. It’s where we come and we have this moving, breathing organism called the church.

And I think sometimes it happens over meals in homes in different rooms in the church, wherever it might be. But life happens, in those, in those contexts,

Ben Willey: We have some back of house type things that we do, like every church does. And we try to organize understanding who our people are and all the people that we have that come through.

And one of the things we’ve asked ourselves is what does it mean to belong? What does it mean to not just be a visitor of a church? That’s one label we have, or not just a pursuer, there’s another label we have, but what does it mean to move people to this sense of belonging, to belong to a church? And we really believe that the two things that move people is serving together and being in a small group together. That those are two ways that people are, like you said, not hiding, not spectating, but are locking eyes with another person and other people so that they can do things together, help them move, do the function of meals when’s necessary, et cetera. But even more than that, that someone might be able to hear one another’s pain, encourage one another specifically in the things of the faith.

Mike Candy: I know some of them are just purely life stage. I think of even in some smaller ways, I’d love to consider even the children’s classrooms.

My kids in specific groups with other kids, their age are growing. They’re getting to have interactions there in a different way than they would in a large gathering a crowd on a Sunday morning. Same with youth groups all the way up through there’s life-stage groups for young adults, or even women’s groups, men’s groups, you know, these are probably pretty obvious, but yeah, all sorts of different ways that we categorize small groups.

I just think sometimes we. We don’t talk about all the ways you can be in one and lots of ways. Lots of on-ramps at least to getting involved in this.

Ben Willey: And we talk about different sizes of being in a larger church and having small groups. And we do find that having medium-sized communities that break into small groups is an easy way for people to feel included.

And pastor Mark, I know this has been a passion of yours to get together groups of people, maybe a hundred, hundred fifty that have a chance to learn together, but then also break into groups. How have you found that to be meaningful here in south Jersey?

Mark Willey: Well, I think yeah, I think a number of our ministries have built around that model.

And I think the, the benefit of it is certainly it’s a lot easier to come to a larger group feel part of a larger group and then go into smaller groups. I also think it gives you a sense that your, your individual group is a part of something larger with people in similar life’s situations and struggles.

So I’d say. Many of our ministries are, are built around that model and that are easy to enter that way and then get into a small group as you become a part of the larger group.

Ben Willey: So we conclude this saying thank you for listening and putting the requests back to you. If you are in a local congregation, if you are in our local congregation, get in a small group of some type or form where you can be processing your life and your faith in real time with the body of Christ. Thanks so much. We’ll see you next time.